*Feeling "great" might be an overstatement as I actually feel about ninety years old after painting today.

The year was 1985, and I was in the throes of celebrating my sixteenth birthday. I was resigned to being a couple of years past an unsuccessful quest for coolness. I was tired of chasing after hip clothes and shoes with price tags and styles I wasn’t particularly fond of. One of my presents that year was this funky time telling device…The McGregor. I hadn’t seen anything like it on anybody else’s wrist. I should probably say that I just hadn’t noticed because once I wore my new Swatch to school, I realized how many other people were sporting their own unique Swatch flair. Dare I say, it was cool?

Study halls and lunch time were when trades took place, Swatch guards were adjusted, bands were swapped with that nifty little tool. (Oh, how I hope someone old enough to remember those days is reading this letter. If not, please pass me on to the dinosaur department. I was going to say Fossil department, but obviously that was a completely different decade and company for me – no offense.) Some girls wore team jackets or football jerseys, but for a brief time, I had someone else’s Swatch.

For sentimental reasons, the remains of my first Swatch are in a frequently opened drawer. I remember it had one green and one red band. The primary colors and large size were great, but it didn’t take long for me to diversify, and the Pink Flamingo was added. The Tutti Frutti soon followed. Those designs all carried me into the nineties, where I added Grune-Lui to my collection.

Time, and the telling of it, went on. I became a wife and a mom, but always felt nostalgic whenever I passed a Swatch display or store. In the mid-2000’s, I ran into the store at Grand Central Station and treated myself to the playful Hang On Tight. It quickly became quite a conversation piece. Recognizing my love for these relics of my youth, my sister gave me Sliding Waves for my fortieth birthday.

I think I am about due for a new classic. Another decade, another Swatch! Decisions, decisions…

Did Swatch give me the time of day? They did indeed! I was so excited to rip open that big envelope, as I was fairly optimistic that there was something Swatchtastic inside. Had they found the lost tomb of Swatch guards? Maybe a t-shirt? 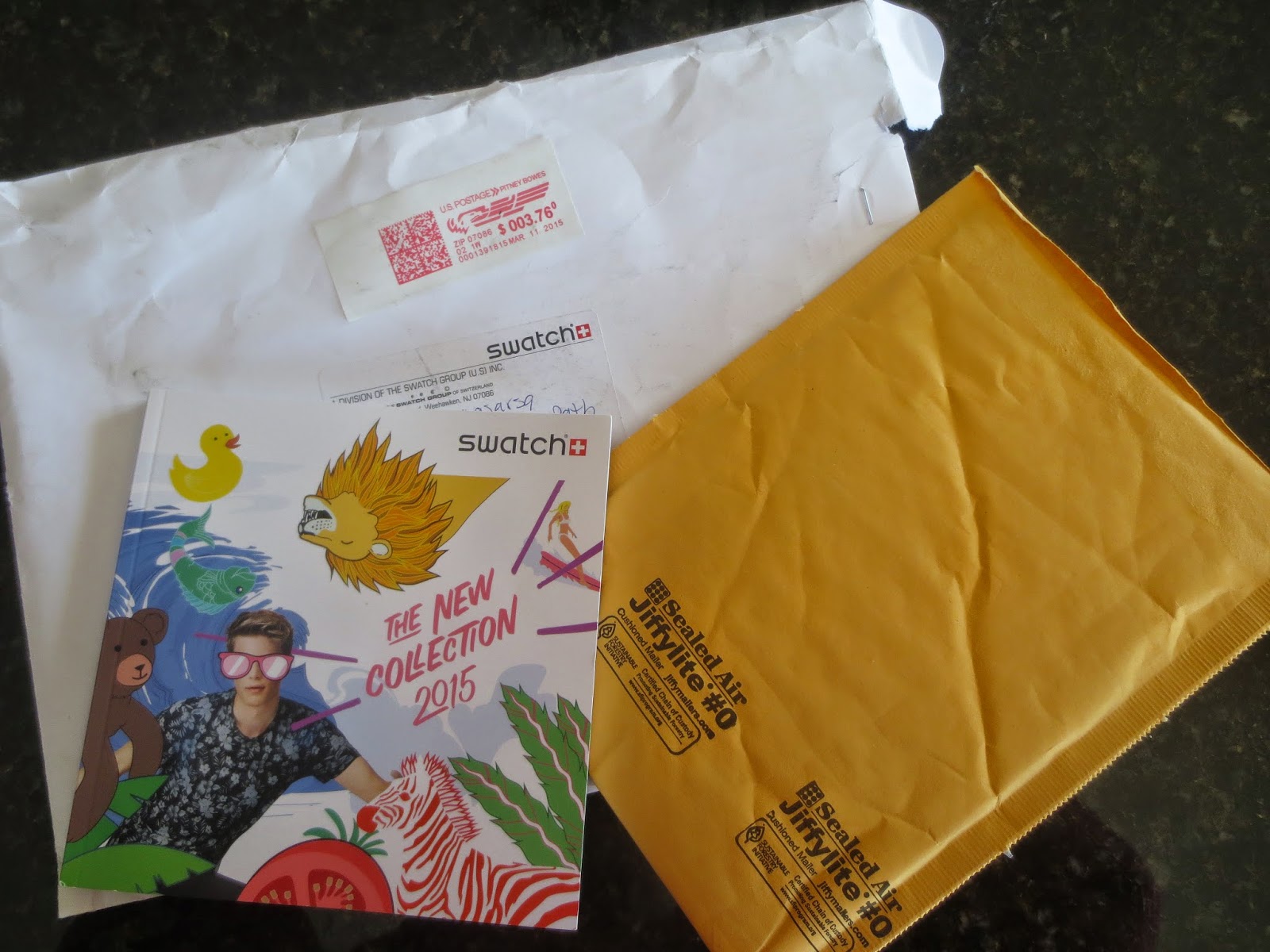 OK, you see the catalog. Full of awesome. But what about that other padded envelope? Oh. My. Suspense. I turned the envelope over, glanced at the letter and, SPOILER ALERT! 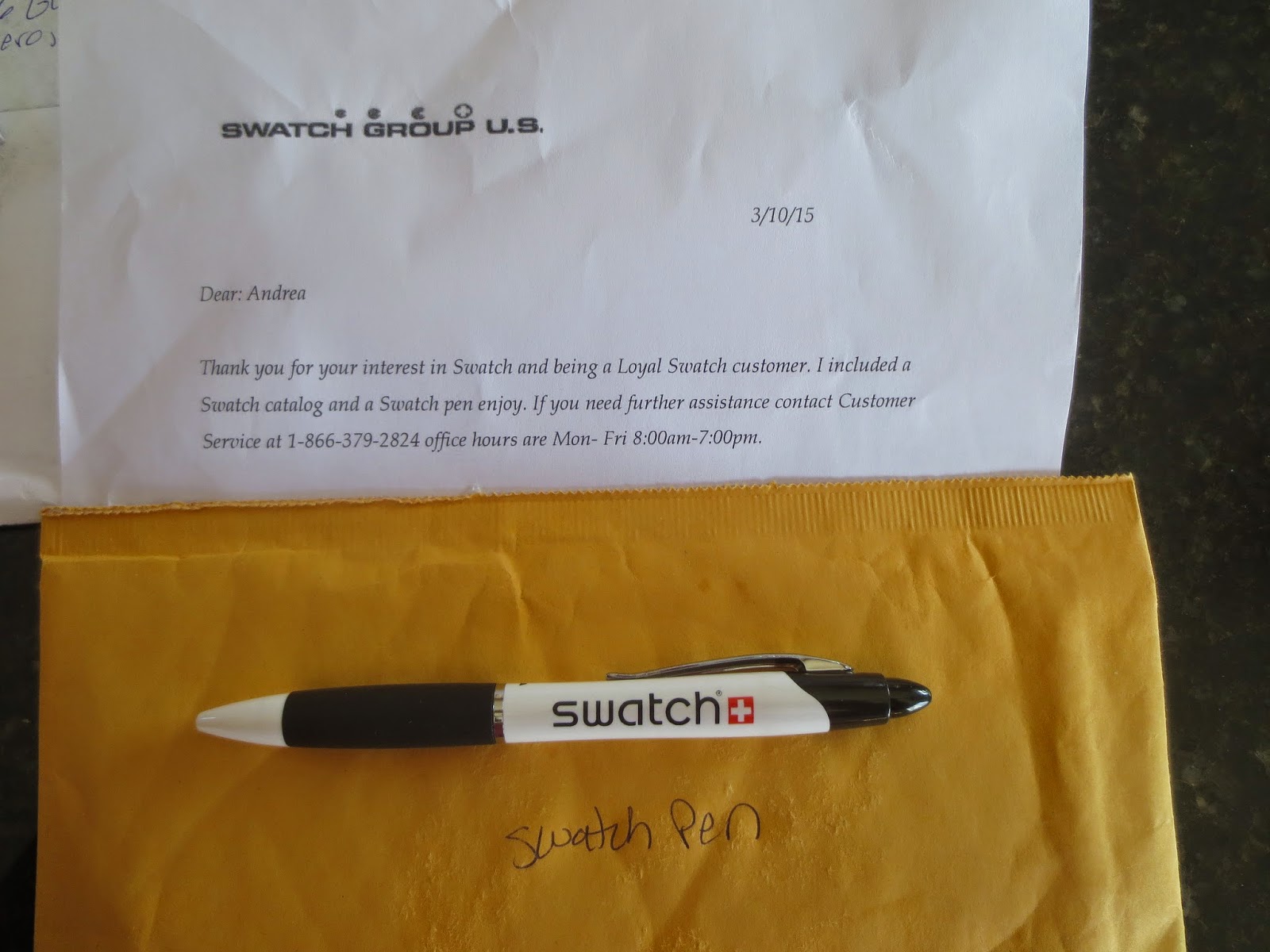 They wrote "Swatch pen" right on it! Go ahead though...gaze upon the glory that is my new Swatch pen. Sadly, it does not tell time, but it is merchandise worth five points!

If anyone sees the competition, tell her I miss her...and that I am winning (finally)!
Posted by Andrea at 8:54:00 PM