I know mammograms are not dumb. I know we are lucky to live in an age where such diagnostic tools are available. I know that scheduling my annual trip to the imaging center with my bosom buddy, Mary, is much better than going solo. 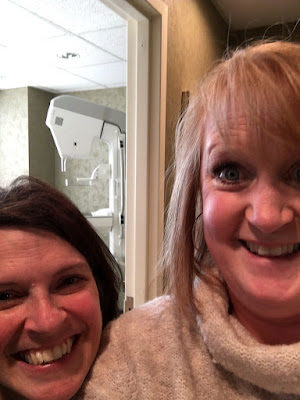 A couple of things are not important to note; however, I will do so anyway. My friend is not a giant, nor am I an elf. Rather, we were trying to make sure the Señorita Squishee machine was visible, causing me to crouch. My friend is not only cuter in person, but would also like it stated that she does not typically look so crazy. I reminded her that we were two women who make mammogram appointments together and commemorate the event with selfies. Crazy is relative. The large smiles indicate that our compression chamber time had already happened. Yes, we were cleared to leave. I admit to a certain little spring in my step once that weight is figuratively and literally taken off my chest.

I stopped at the store for some dinner ingredients, feeling rather proud of my productivity. About two miles from home, my cellphone rang. It was the imaging center. Obviously they were calling to confirm my fabulous test results, a slightly tedious, but worthwhile formality. Why was she taking so long to tell me to have a nice year? "The radiologist wants you to come back for some additional films of a density he saw in your left breast." (This is not meant to be a cliffhanger of any kind, as that would be cruel…everything is fine, Mom!) Excuse me? I have been called back in for additional shots before, while sitting in the holding booth in my gown…not when I am in transit to the comfort of my couch, giddy with relief. I found myself more concerned with my recently acquired frozen vegetables than turning the car around. I literally could not switch gears.

I scheduled something for the next morning. I called Mary to lodge my complaint with the false sense of security I had been given when told everything looked good and I could leave. She asked if I was headed back as she would turn back and wait for me wait for me. I made no logical response. She asked me why I wouldn't increase my chances of being able to sleep that night by getting another appointment that same day. I knew she was right, but I think part of me was less frightened being angry at the woman who called me and the one who let me leave in the first place. I was able to get one of those "as soon as you can get back here" appointments, and picked up Mary on the way.

Small perk, I did not have to dig out my insurance card again. The lady asked a tech who was walking by if she'd mind taking me in, as I was a "callback". Sounds very theatrical or actressy doesn't it? I got the part! I asked her if we could pick up my moral support person from the line of chairs. She asked if she had an appointment as well. Um, well she did, an hour ago, with me…we book them together when we can.

The woman who had done my mammogram the first time walked by and smiled saying "Oh, you guys are back?" I did not trip her.

Every time they tell you they are going to take another picture seems concerning. The wait for her to show her work to the radiologist seems long. Each word leaving her mouth seems to take forever to hit your ears, and the comprehension of those words is on its own delay as well. "Fine" "Overlapping tissue" "No ultrasound needed" I glanced over at Mary to make sure my urge to smile was appropriate, that I heard correctly.

We had barely pulled out of the parking spot when Mary wrestled a container of chocolate covered cashew something or others out of her bag. We ate far more of them than usual, with not a single speck of guilt or wonder over what a serving size actually was. We were going to need that candy either way, but I obviously don't need to tell you how glad we were to be celebrating with it.

Is this Tuesday's post a little less random than usual? Yes. Is there a reason I shared it? Yes. If you are due, or overdue, for a mammogram, squeeze one in (pun intended). Go with a friend, bring snacks!
Posted by Andrea at 7:19:00 PM 10 comments:

I am not terribly impressed by my winter facilities. However, that does not mean I wish to share them with any other wildlife. Wait, I take that back because the bunnies left me some delightful snacks, but this flock? 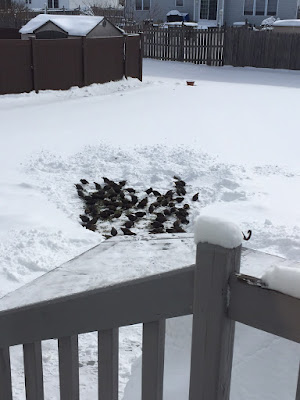 No thank you! Maybe they will be intimidated by this look... 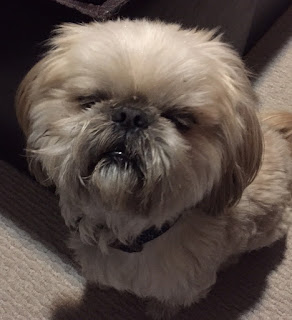 Ready or not, here we random

I was all set to talk about the weather, complete with deep freeze thermometer reading photos, but now that Mother Nature has caused a second day of cancelled plans, she will get no further attention here this week. 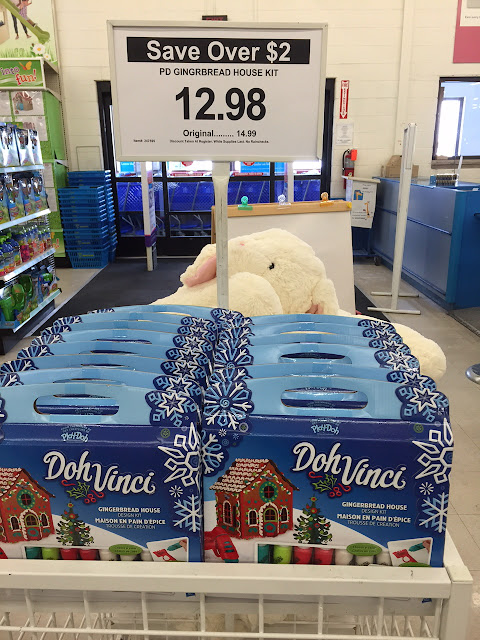 I just couldn't buy this for Foz... 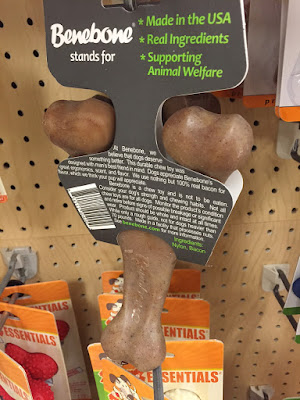 …and am not going to bore you with some long dangling list of reasons why.

These were kind of yummy, but I was a little disappointed to see that they were just "snacking chocolate". 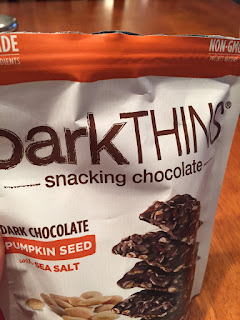 Could somebody point me to the "meal chocolate"?
Posted by Andrea at 7:32:00 PM 5 comments:

Sometimes it's all I can do to lift my head off the pillow... 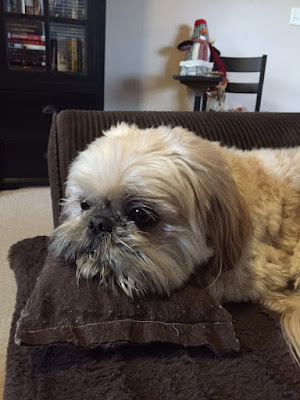 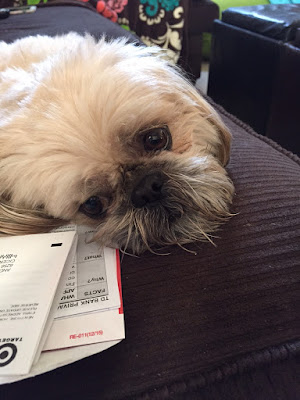 I didn't ask for any of those things. 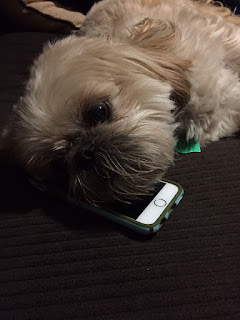 This is random day, right?

Did you ever have a certain thing that you did on a certain day every week? Then maybe you suddenly stopped doing that thing and felt the structure of your week slowly unraveling? So this is Tuesday, correct? I started my morning a little different minus my usual gig at Meals on Wheels. I did not dwell on whether I missed it today, as I did not stop to consider what day it was. I forgot to make tacos for dinner and I don't think I even ate any m&m's (ok, that is not a Tuesday specific thing).

Well, I don't really have much prepared in the way of the random. Sometimes I get busy decorating for holidays and oh, you know, cutting coupons. Wait, the pink and red heart decor was what I was supposed to be flinging about, right? That's what I thought as I was clipping big savings offers on Valentine candy and then… 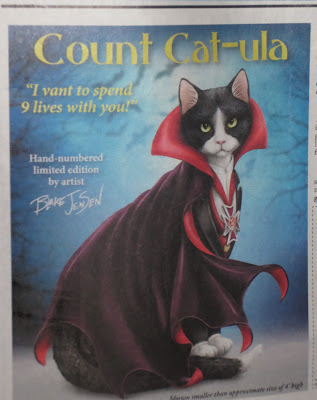 …Apparently dracula cats are always in season. Count Cat-ula? Come on my crazy cat ladies, admit that this really doesn't even appeal to you! (please)
Posted by Andrea at 8:22:00 PM 6 comments:

Why The Face The Foz?!?!
Well, that's easy. Remember this? 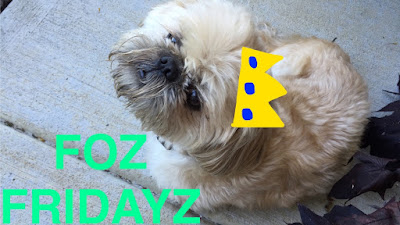 And how it turned into this? 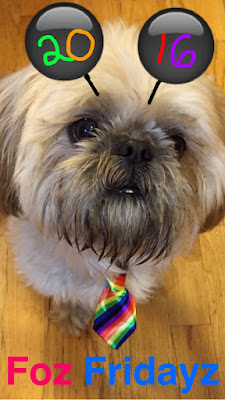 And do you remember how I told you this was not going to be a thing, Foz?
I am pretty sure that when you bother to have someone help you with a graphic of sorts, it is admitting that this is a thing!
I see your point.
I do not appreciate the way you have been slacking off here and there (and everywhere). How can you pretend to forget about me when I am sitting right here?
I think it is best that I not answer that. How about if we just see what photos you haven't commented on yet? Say "CHEESE" if you agree... 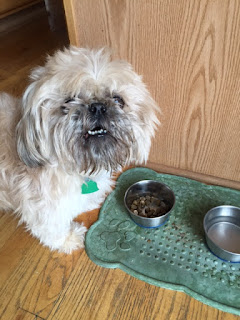 Great, I'll take that as a "yes"! Oh, are you aware that you have something in your eye?
Do I? I thought I was just losing my vision. Let me out a coat on and we can head to the groomer. 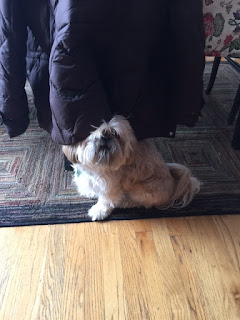 What are you looking at? You wear a coat your way and I wear it mine.

That's right, just drive me and all of my majesty home now. Pretty sure whoever is wearing a neckerchief is in charge, and that is obviously me! 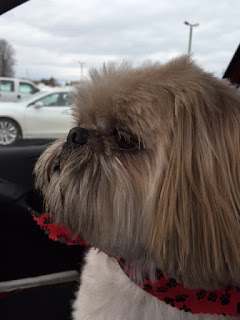 (Totally should have put a bandana on when we got home.) That's funny, I don't recall asking for the "Justin Bieber". 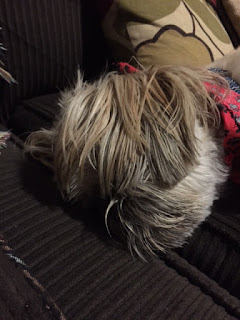 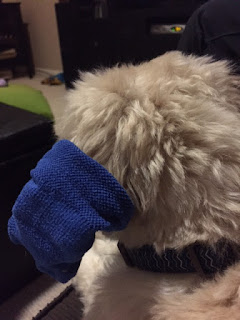 Oh, sorry. The girl-child must have thought you said to put a sock on it.
We're done here.
Welcome back Foz!
Posted by Andrea at 3:48:00 PM 4 comments:

Back to the creepy random

If you were a fan of my trail mix, I think you might really enjoy the fruit bowl! 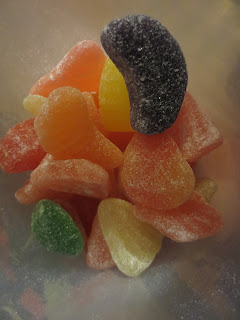 We went to see a play this past Saturday. I admit to being slightly dismayed by the thought that my son was going downhill skiing for the first time during the performance. Oh, how I hoped I didn't get an injury phone call! The play was entertaining and distracting enough for me to turn off that small part of my brain. The play ended at 5:35, then... 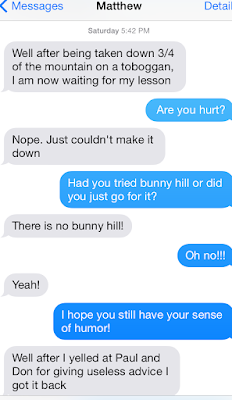 That first message needed to say "I AM OKAY" because I could not get to the end of that sentence fast enough and without nearly barfing! I mean I knew he was conscious, and I did realize that he probably was not going to go for a lesson with broken limbs, but still, you get it, right?

Ah, motherhood! The beauty of a woman with child... 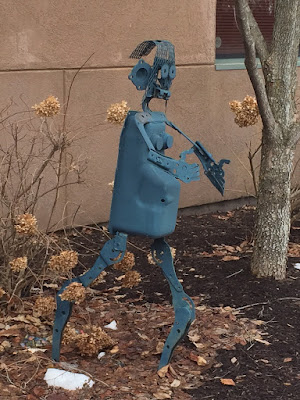 …so, uh, um…"artfully" depicted in this work outside our OB/GYN's office. Yikes!

And now the moment we did not even know we were waiting for…because seriously, who can believe there are more? 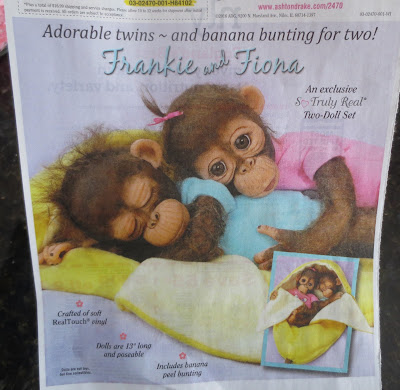 A banana peel bunting? For two poseable creepy monkeys that are fine collectibles and not at all toys? Frankie and Fiona, you have got it made! Wake up, Frankie! Are your eyelids poseable?

Always hard to follow the creepy monkeys, so I guess this is the end of this post. We have reached the bottom line... 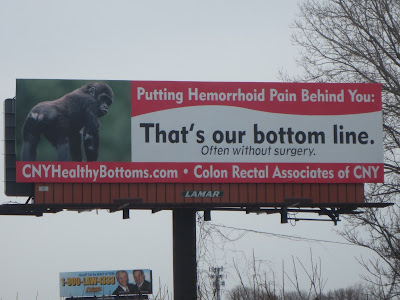 Um, this billboard is just trying too hard! Plus, it is next to a highway, so the first time I passed was a very distorted "wait, what the?" The "behind" with the ape behind, plus the "bottom"…creepiness all around! I think "Get rid of that pain in your ass" might've been a more subtle and acceptable approach.
Posted by Andrea at 3:31:00 PM 6 comments: