Fit to be Tried

One would think that these awkward introductory paragraphs where I try to acknowledge my blogging absence, while never really explaining it, because there is never really a concise reason to give, would keep me driven to charge the chromebook and tap out a few lines on a more regular basis. One may also note that simply because I enjoy both the writing piece, as well as the interacting with you piece, there would be enough motivation to put down the handful of candy long enough to let my fingers dance across the keyboard to tell you all about said candy. Apparently one would be wrong. I spend far more time on the daily thinking, or lamenting about this little old blog space than it would take to just put some words out there. I did get to a point where the thought just stopped in its tracks every time it tried to dance on by, "Maybe we should blog today?" "Nope." and that was that. No pondering what topic to muse upon, no trying out sentences. More of a stop before this can even get started sort of thing.

Finally the other morning while I was lying in bed, which I seem to "like" to do now between 5:00 and 7:00, I let some bloggy thoughts in. I'm not exactly sure what they were now, as once the door opened, all sorts of debris flew in! "Simmer down folks, take a number and we'll try to get to you in an orderly fashion despite how disorderly it appears."After a couple of days trying to sort that out, I still didn't know where to start. Several days of stomping around in the snow, mixed with an unflattering view in the Target fitting room, and I knew who I was again.

I'm the lady with the ill-fitting bra.

Perhaps you recall the some of the trial and tribulations? If not, you can reacquaint yourself here, here, here, and even back here in 2012 for starters.

I cannot confirm that I spent any quality time trying on the last two bras I have been making do with before purchasing them. Let's face it though, sometimes the level of dressing room calisthenics I am wiling to partake in is not going to be an accurate measure anyway. A post purchase stretch in my bathroom mirror once revealed that the girls were playing peek-a-boo out the bottom, so I was happy to have a shirt to hide what my undergarments apparently did not. A more recent glamour don't was a side gap situation that was also luckily hidden by clothing. Neither of these specific problems, nor general discomfort sent me spiraling down to that dark place of flipping through hangers again though, so you may wonder what it took to send me shopping? Slipping. Straps.

No, no, NO! I cannot stand having straps slipping off my shoulders. I am not sure I even understand the logistics of how that happens under a not exactly loose fitting long sleeved shirt under a winter coat. I kept having to reach in the neck of my shirt to retrieve the offenders. Ugh! I had to resort to the uniboob sports bras that have been hanging around here waiting to be sporty because I was not going to perform a strap rescue mission while bundled up for snowshoeing (and yes, that is passing as sporty).

Target was my destination because I certainly did not want to pay a lot of money for lingerie destined to do me wrong. Moreover, if the situation became dire, there would be plenty of options there to soothe me in the book or candy aisles. Did I spend as much time investigating options as I could, and perhaps should, have? Of course not. Was I momentarily hypnotized by words like "wirefree" and "no slip" and "comfort"? 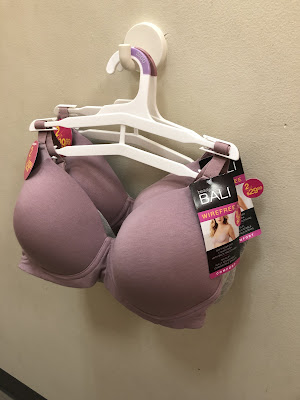 You know I was! Plus a two-pack that eliminated the need to decide how many or what colors, despite not being clear if they were both functional colors? Sign me up! While the temptation to grab a size that seemed familiar to purchase and try on in the discomfort of my own home, I have met myself and know that the chances of an ill-fitting bra being returned are questionable at best. I took TWO sizes and marched off to the ill-fitting room. Yes, it should have been like the scene in Officer and a Gentleman where he carries her away. I could hear the clapping, feel the pride, as I had arrived.

I looked at my reflection in that large mirror in the unforgiving light. "You've got this." I threw my coat on the bench, did some deep breathing and got to it, just to wrestle the non-sliding straps off the hanger and... 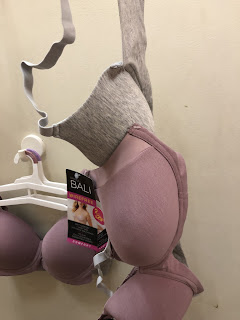 ...what the actual hell? I was going to have to try on a bra hooked to another bra? Perfect. Nobody was harmed or hanged and decisions were made. I donned my new purchase when I got home, and may have wondered for a split second how my body shape could have shifted in such a short span of time, but a little reorganizing sorted things out. I may also have been reminded why I recalled telling myself not to buy wireless bras anymore, but it's winter and I have layers to work with. I'll tell you this though-the straps don't move, and I wrote this blog post, so I am calling it a win for now! Celebrate the small victories with me and get yourself a piece of candy!