C is for Crayola Crayons

This is a sight that brought me great joy as a kid. 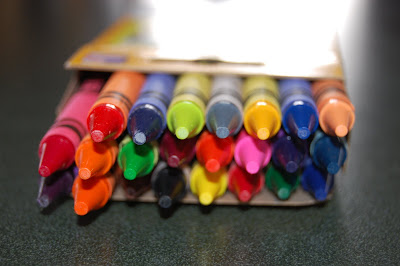 When I opened the box to take the photo, I have to admit that I still got a little charge. I don't care for the smell of these waxy wonder sticks, but the visual and thought of good times to come? Yay!I took great care of my crayons, and could not stand to see broken ones. Those kids at school would just use them all willy nilly, with no regard. For what? I am not certain. A crayon that was worn down far enough to need the paper ripped for further coloring was pretty much dead to me. The box of 64, while delightful, put me in a bit of a quandary because it had the crayon sharpener built right in, but that required some tearing of paper, and the point just never looked as magical as a fresh crayon. Sigh, that was disappointing. I used to try to color my skies and grasses with a slanted grip so that the top of the crayon wouldn't get so flat. Oh, and in case there was any doubt in your mind, they had/have to be Crayola.I was not, nor am, overly protective of my children's crayons. Those were for their enjoyment, however recklessly they saw fit. I just would not have wanted to share my own box with them. In fact, I think I did grow to have some appreciation for the worn down point of a green Crayola because it meant someone had been inspired. Little hands had drawn big things.
In an attempt to prove how far I have come in my crayon usage relaxation, let me show you what recently went on in my very own kitchen, at the hands of my daughter.


Maybe I felt a little crazy at first...

Who am I to stand in the way of creativity? 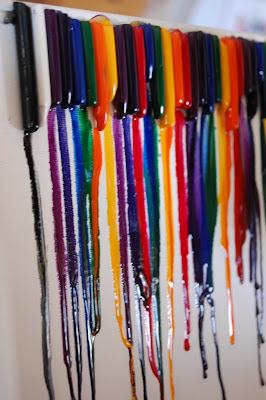 **If you are looking for Random Tuesday Thoughts, fear not, there are plenty of hours this Tuesday left for me to post them.**
Posted by Andrea at 2:48:00 PM