Yes, here we are, just one letter away from the end of another a-z challenge. I thought I would pause and take a moment to explain how some of these posts evolve. This letter provides a perfect example of my often imperfect system. I started with the premise that I would try to stay true to myself in choosing which movie soundtracks to post.

The letter Y was to be another slight departure from my typical musical stylings with the movie Yentyl. Both of my parents were big Barbra fans, so my appreciation for her and this movie was no surprise. However, when I looked up the soundtrack, aside from Papa Can You Hear Me? some of the songs I expected to see were not there. I quickly realized that part of the reason was that America is from the Jazz Singer. No disrespect intended, Neil and Babs. I am sure that if I took the time to actually listen to the soundtrack again, I probably would have recognized many of the songs. How could I claim that it "mattered" to me though if I was so confused about, and apparently unfamiliar with, the album?

Letter Y, letter Y...You've Got Mail. Did that movie have much of a soundtrack? Time to ask my friend google for some help. Hey now... 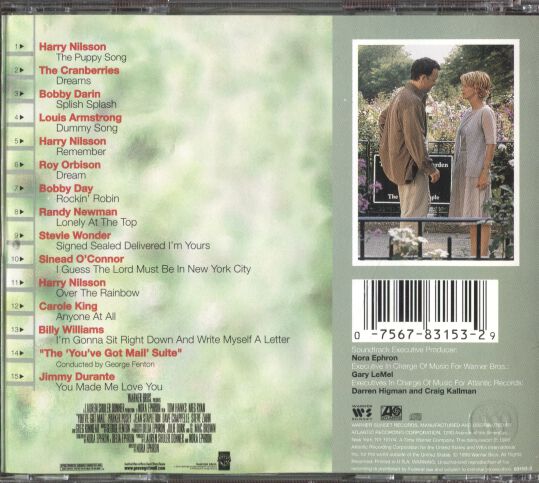 ...super stuff there! As I pondered the movie some more, to try to get a feel for the tunes in context, I realized I was envisioning Sleepless in Seattle. Ugh. Since this theme has been about the music, and I cannot deny that this mix is awesome, let's go with it. Songs I loved as a kid, like Splish Splash and Rockin Robin*, combined with the amazing Carole King, mixed in with one of my college loves, the Cranberries.

And just in case you needed this after all...