Remember how I mentioned that my son had decided not to attend this year's ninth grade dance? 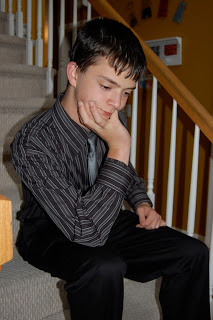 I remember the decision quite well, as it withstood several inquiries into whether or not he was certain he did not want to go...several. It couldn't possibly have had anything to do with the complete mockery we had made of the list of rules. If anything, I thought the guffaws he and I shared would make him more eager to go witness the spectacle for himself. Portions of the letter to parents were posted in a few different blog posts, but to get everyone up to speed, here are the main points...


Boys should wear a button down shirt, dress pants that must be buttoned and zipped and worn appropriately, not sagged down exposing undergarments. Boys should NOT wear velour pants with the matching velour jacket. It is not necessary for the boys to rent a tuxedo. Canes and top hats must be checked in the coatroom.

Girls should wear a dressy dress, either long or short. Students are not allowed to wear tube tops, garments that are completely backless or below the bra line, see-through clothing, dresses that are to be worn braless, tops that are too low cut in the front, and any clothing that exposes any of the midriff or the belly button. Skirt length should be the same that is appropriate for school. Strapless dresses and spaghetti straps are allowed

Although we would like everyone to have fun, there is a style of dancing that is unacceptable at the Junior High dance. Students are not allowed to dance in a style that is sexually explicit, suggestive, provocative or simulates any sexual act. We will not allow grinding, moshing, or slam dancing.

It is also not necessary for students to arrive in a limousine. As adults, we must recognize the fact that the students attending this dance are only 14, 15 and in some cases, 16 years old. Although a lot of fun, limousines and tuxedos may be more appropriate for older students and for adults. If we allow our children to indulge in these pleasures too early, what will they have to look forward to in the future?

Top notch kill joys, no? It does make you wonder what was happening to require that some of these gems be written out. Full commentary on these topics available here, here, here and here. Moving on...

Maybe he was just disappointed that he could not shop for matching velour AND a cane to ride around in a limo wearing. He actually said there would just be so much drama, and he'd rather avoid it. 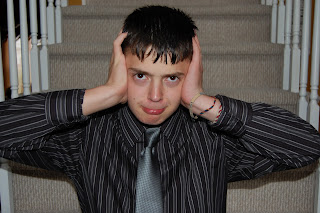 As I poked my head into the boy's room at 9:20 to say good-night last Wednesday, I told him there would be the usual fun Friday night stuff to do in lieu of the dance. You know, to sort of put the whole thing to rest. The response? "I am curious and think I'll go if Cam will go." Yes, this is part of the grouping who had grand plans to attend this fete three months ago. Ugh! The last day to buy tickets was the following day (of course), so by 6:55 a.m. on Thursday we had confirmation that it was a go.

Ticket was purchased, dress shirt selected, and thank goodness it was finally Friday. That is until I got a text at 2:00 that afternoon to inform me that everyone else was wearing all black and he did not want to feel awkward. Oh boy! The retail gods shined down upon us as the shirt he liked happened to be marked down to $3.98, so I let him get a new tie too. $15.00 later and he was good to go! (The orchestra concert clothes from two days earlier covered the bottom half, since I actually had items that were his and fit properly this time.) We made sure to belt his pants to better adhere to the no undergarments showing rule. Now that you have the abbreviated tale of how he found himself on his way to the dance, we can proceed with the debriefing...

Did you feel safer knowing the extensive rules that were in place?

Did you, in fact see any matching velour.

Any canes or top hats?

One, and it was checked. The coat check consisted of throwing coats on a table in the cafeteria.

Were the dancing rules followed?

No, all of them were broken, except for the mosh pit.

Were there rules for the chocolate fountain?

No, there were supervisors.

What was the most outrageous thing?

Some of the date pairings?

Was there as much drama as you anticipated?

Two girls cried, that's it (almost sounding disappointed). One's date left her standing on the dance floor and the other one's reason is unknown.
******
We ran into another dance goer's mom at Target yesterday. I asked if she thought her son might be up for a few questions about his experience, since she had eluded to some new information (including a girl who was almost turned away due to the shortness of her dress). I saw what was getting out of some cars, and was not surprised. So here's Diddy...

Were you well briefed on the rules for the dance before attending?

No. (This is unacceptable as his mother is a follower here.)

What was the most outrageous thing you saw?

So you were not aware of the rules regarding what kind of dancing was acceptable? (I filled him in.) Did you see any of these kinds of dancing, or witness anything unusual?

Oh, a friend got hit in the balls while dancing and started puking, so he had to go home.

How would you describe the dancing he was partaking in?

See now why you guys should've read and followed the rules?

I was also reassured that I did not need to feel badly for Diddy's ladies' man of a ten-year old little brother. He had a jolly good time at the pre-dance photo shoot he took part in "sniffing all the girls...and they smelled good".
******
A good time was had by all! (Well except for those two girls and that boy.)
Posted by Andrea at 5:40:00 PM