I was just reviewing the rules of Fight Club. I know this may seem like an odd way to pass the time, but I needed a refresher, and also to confirm whether those rules were more detailed and easier to follow than the ones involving Twitter usage with my teenage daughter. Suffice to say, I feel more educated on the ways of Fight Club. That is not to say that my actual performance in the club's ring would keep me alive, but I am not dominating the tweetarena (pretty sure that's the lingo, right?) either.

The first and second rules seem to be about the same, except for the parts where they are totally different.

1. The first rule of twittering (another bit of hip lingo, I think?) is you do not talk about twittering.

2. The second rule of twittering is that you DO NOT talk about twittering...unless it is something acceptable for you to comment on. See? See where this all gets a little foggy? From what I have been able to deduce thus far, if a person under the age of old is mentioned, or tagged, (ok, or whatever you call it when you put that @ thing in front of someone's twitter handle...twitter handle? breaker one-nine?) then I should pretend I did not see the tweet and keep all comments, regardless of how hilarious I find them, to myself. However, I should retain some knowledge of what I have seen in the event that information is referenced because a teenage girl should never have to repeat herself.

3. The third rule is probably obvious and falls under the realm of common sense, but everyone is a rookie at some point. Never comment on any tweets seen anywhere other than the regular feed, meaning if you find yourself just casually lingering around after hitting "view conversation" or going directly to someone's page, it is time for a vow of silence. Commit information to your own memory for future understanding of moods, but forget immediately if you think you might actually blurt the now secret data in a random daily dialogue. Your concern is not appreciated.

4. Never ask the appropriate lingo for all Twitter activity, and never call things by the wrong names despite never learning the right names. You are better off making up ridiculous terms, so that your teen knows that you know you are not correct. (I break this rule. Newsflash?)

5. Check your Twitter account daily, even if it baffles you or makes you feel inferior, because you wouldn't want to miss anything...which leads us to... 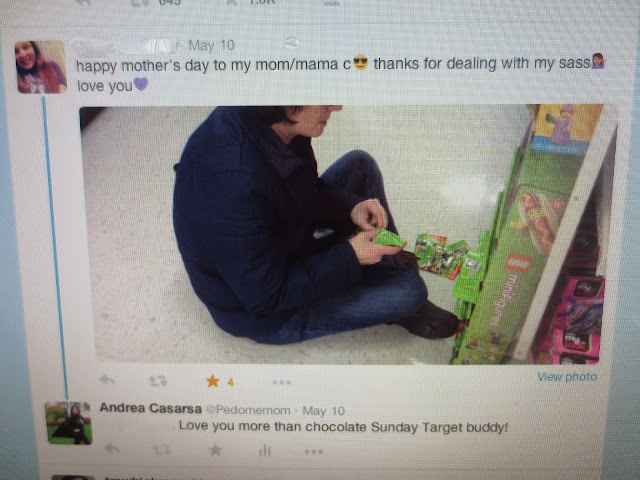 ...keep it cool! Keep. It. Cool. Not only did I have warm fuzzies because she loves me, but also because she publicly admitted she is sassy! I was not losing my mind, as her sideways glances had previously indicated.


(She is still speaking to me, so my response must have been acceptable...possibly only because it was Mother's Day. My gosh, there might be different rules for special occasions! )