In honor of the return of winter, and the first snow day of the school year we had this week, let's warm up with some soup!

Soup is good food, and after several trials with a variety of Italian Wedding soups, I was pleased when my teenage daughter announced that Campbell’s Homestyle Healthy Request is her favorite.

Let me set the stage for you. The predicted winter storm hit us here in Central New York, as the rain turned to snow, around 8:00 this morning. The kids had another snow day, but I had some errands to run. The slippery road conditions sent me home with a few items not crossed off of my to-do list, one of which was ingredients for dinner. I was surveying the cabinets to see what odds and ends I could come up with to satisfy everyone. My daughter announced that as long as we had a can of her favorite soup, she would be all set. Luckily, I found one last can.

The afternoon stormed by, and our driveway shoveling left us chilly and hungry. I was so relieved that I did not have to worry about dinner for at least one of the four of us. Plus, the added bonus was that I knew she could fix the soup herself when she was ready. The lid was peeled back, and as she poured the soup, she quickly realized there was no pasta…none. There were very few carrots either, which she said was unusual, but certainly not the deal breaker. She was not interested in this sad can of soup. It is still sitting on the counter, as there were no other takers.

She did not want the can of store brand Italian Wedding soup we had, nor the can of Chickarina. She is brand loyal and likes what she likes. (I believe I mentioned that she is a teenage girl.) I hope this has not caused her faith to waiver, as this variety is a little tricky to find where I typically like to grocery shop, so I have to seek it out elsewhere.

Did they respond? Yes they did! Do I still feel compelled to poke a little fun at the letter? Yes I do! 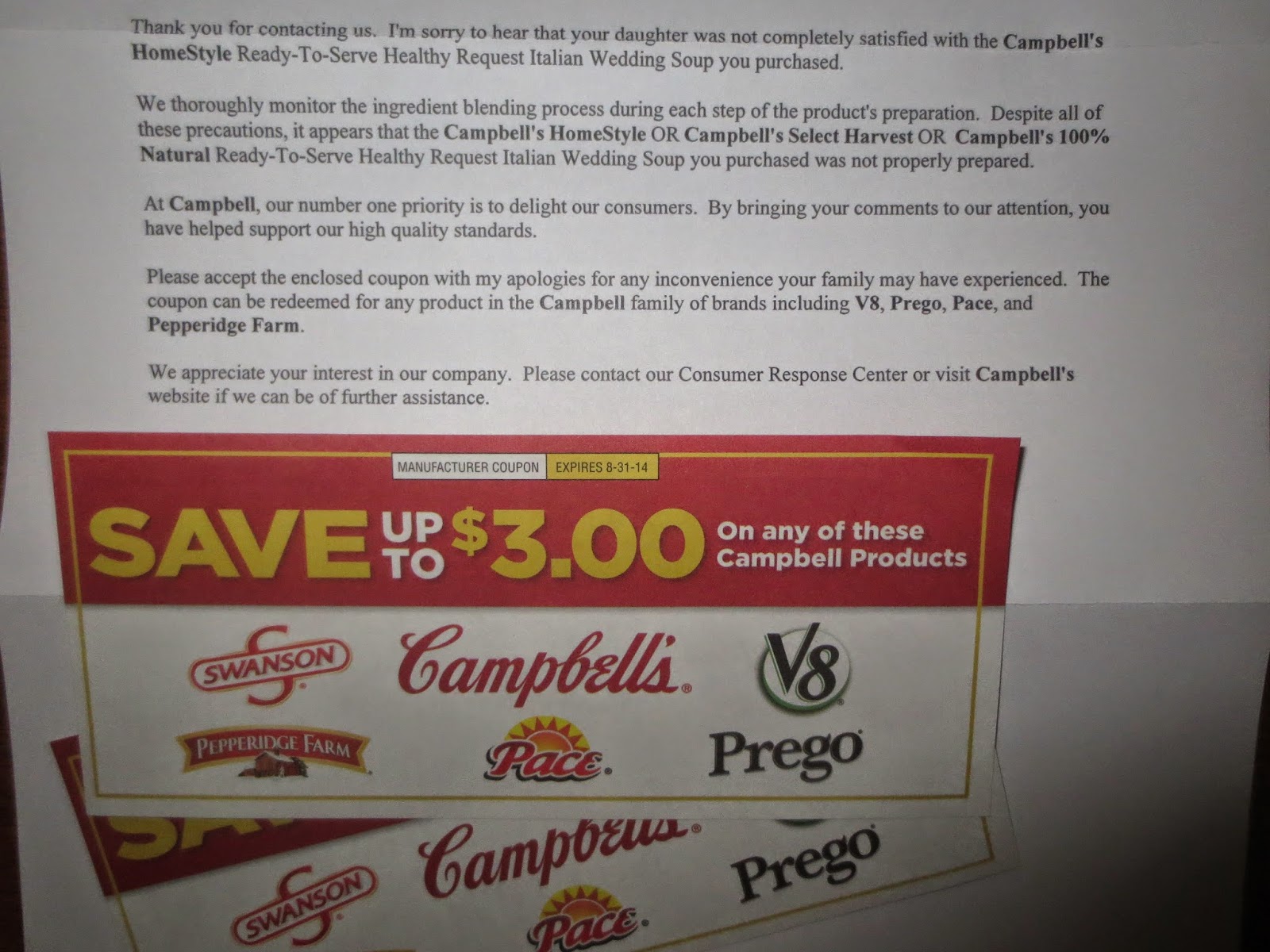 Not completely satisfied? Her soup was completely missing a key ingredient! I also like how the first paragraph knows exactly which soup we purchased, but in the second paragraph it's a toss up. Thanks for the coupons that got us some free soup though (even if we did have to brave the cold to go get it.)

I am taking 5 points for my free soup!
CURRENT POINT TOTAL = 60 POINTS

Stop by and see how the competition is doing!
Posted by Andrea at 7:28:00 AM