Sometimes when you least expect it, something fascinating happens. Something so scintillating that five women managed to interrupt their conversation and uprooted themselves from the lawn chairs they were sitting in. 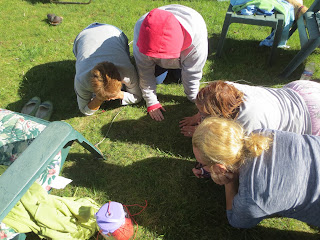 Was it a scramble to get the last piece of pretzel caramel bark with sea salt? 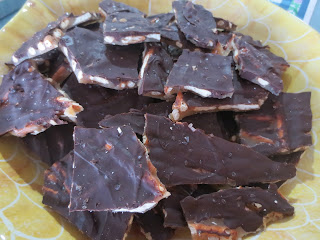 No, there was plenty to share. Was it to check out the spider? 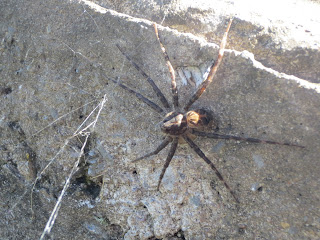 Well, some of us did move to check her out, and some just plain old moved away, but no. Was it to get another delicious Crabbie's Ginger Beer? 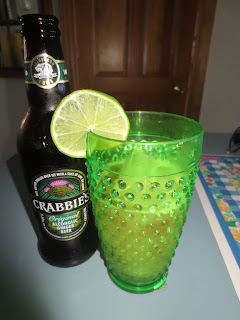 No, but that was yummy. Is the suspense too much? Is it hard to BEE patient? You must think it was the BEE's knees. Perhaps a little something about the birds and the bees, but with a heavy emphasis on the bees?

As we sat enjoying a chilly Sunday afternoon by the lake. A bumble of activity flew through the middle of our circle. A love triangle landed on the ground by the leg of my aunt's chair, and we were invited into the not-so-secret life of bees... 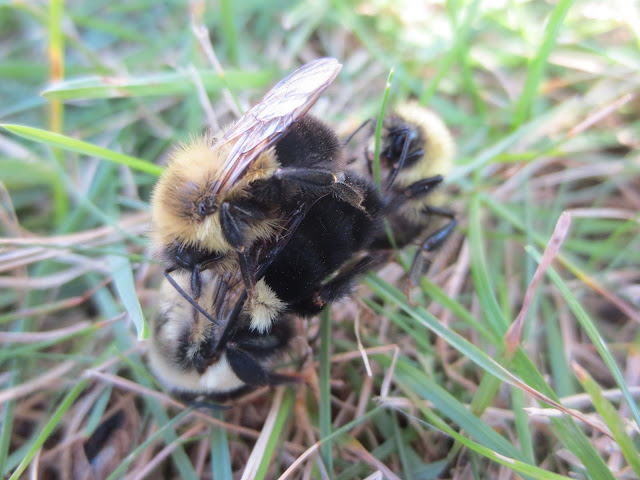 I took oh so many photos, and these lovers were not to be disturbed. We moved blades of grass for the best shots. We messed with our camera settings, finally ditching the zoom and holding our cameras mere inches from the action. We then tried another angle to see if the sun provided an even more romantic backdrop for the photo. This might have been about 20 minutes after the initial landing. 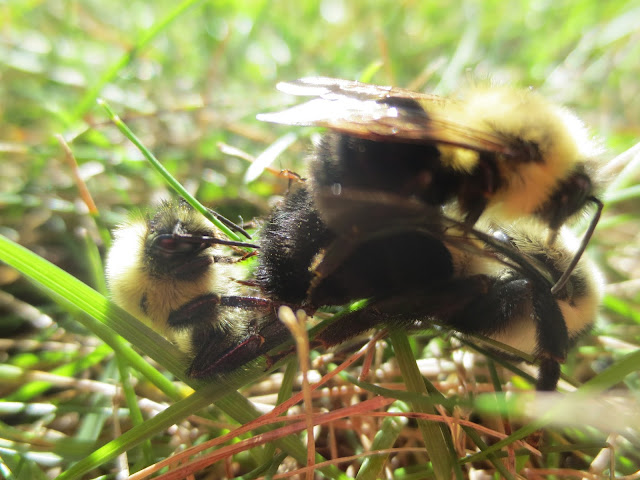 There was googling of "bee sex" and then discussion of whether honey bee habits would be shared amongst other bee species, and what species of bees these even were. (I voted bumble bees, very scientific I was told.) We were pretty much convinced that we saw parts I didn't even know bees had. We were reluctant to tear ourselves away from this show, mainly because we were waiting to see what would come next. I am not sure what we actually thought the possibilities were. (Note: I left at 5:00ish after about 45 minutes of the show. I got a text at 6:17 that top bee was gone and then another at 6:49 that the back bee was dead and lady bee was moving a bit...admit it, you sort of needed that update.)

Speaking of things you might need...someone was taking a video while the rest of us thought she was just snapping photos. For the sake of my blog, and the loyalty to my readers I am (or at least making a valiant effort) to include it. The only introduction it really needs is that one person was on the ground immediately (because she is easily fascinated perhaps) to check out what had landed and the video starts with another person explaining when they joined in...when the words "dry humping" were used. Maybe you can figure out which voice, if any, is mine...but it probably doesn't matter. I now present the bee movie (no not THAT Bee Movie, this one is PG-13)...


Stacy has made her way across the country, and brought her random with her!