His crate is his castle

In our attempts to give some attention to our canine friend, I am not certain any desirable results were achieved. Here is the first (of possibly more...many more) installments of "Why Fozzie hates us this week".


Fozzie does not recall signing off on any paperwork saying that he would participate in any science experiments regarding static electricity. He feels used because a loving blanket snuggle turned into something far less innocent as cameras were grabbed and much cackling ensued. 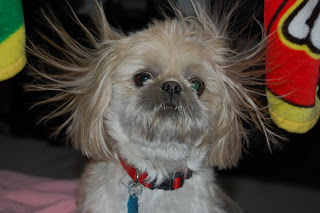 Fozzie would like you all to know that he is a Shih-tzu for crying out loud. And what friggin' part of that sounds Irish? None, apparently. He is not interested in any wearing of the green, as he is pissed that we completely ignored Chinese New Year. 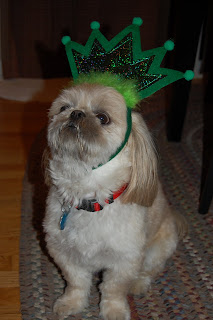 Fozzie's look here tells me that he finds me grossly underqualified to tend to any of his grooming tasks. He was not tricked into thinking the kiwi dog shampoo I flung on his back was even a close second to the blueberry facials his women at the Chatty K-9 provide. He also didn't see why it mattered that he was getting his post-walk undercarriage mess on a bedspread I have claimed to not like anyway. 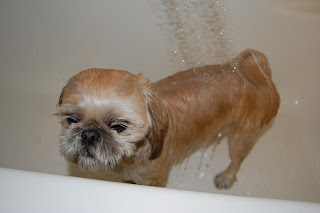 Fozzie has been spent a lot of time over the weekend in his crate away from home (a.k.a under the kitchen table) whenever he was able to break free. Although, since there is no door for him to slam on us, his nemesis (my daughter), tracked him down under there with some shamrock sunglasses that did not stay on...not even for one second...or at least not in the direction of the camera...and believe me she tried!
Posted by Andrea at 11:51:00 AM