So I had this fascinating story to tell about issues I have with candy and the people in my house I am forced to share it with, but that will have to wait BECAUSE...look what JUST happened... 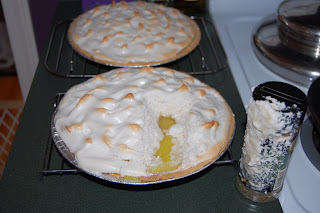 There my lemon meringue pies were, minding their own business, when a strange chef, rarely seen in our kitchen, decided to scramble himself some eggs for lunch. Apparently the pepper he needed was holding up this jar of basil, giving it no choice but to jump upon the pepper's removal. I was across the kitchen eating my own lunch (that was prepared WITHOUT incident or harm to other food items) when this happened. Everyone just had that sudden hush, as if in preparation to watch the mothership explode. I disappointed them all by just continuing to shovel my macaroni into my face. I spoke only when that "chef" mentioned what he did..."oh, I know what happened".

I guess I felt maybe I had left my cooling pies in an unsafe place?

Maybe I shouldn't complain, as at least he was making his own lunch?

Perhaps I should do a better job of organizing my spice cabinet?

No amount of yelling was going to restore the meringue to its original pouffy state (it WAS one of my finest). So I just got up and grabbed the camera...what else could I really do? As I was photographing the pie, the "chef" pointed out that I should really put the basil jar next to it..."Oh, I thought you had cleaned that up?" I applaud his bravery in telling me how to take a picture of what he did!

The plot does thicken a little, as you see there are two pies. Both were made for dear friends...who gets the damaged goods? The people who are coming over for dinner (and right now I am not sure how that culinary experiment is going--might need the pie for the meal) OR the other friend who actually knew I was making two pies and will know I CHOSE the crater dessert for her?!?

By the way, when I went to the grocery store this morning, I accidentally bought instant lemon pudding, so I had to go back out to get cook and serve. Also, the frozen crusts were not both intact...I think the damaged meringue is on the better crust...maybe THAT is its selling point!