Please note: My husband does not have syphilis**

How's that for an intro? Where do we go from here? Why must we speak of this now? Well, I walked into Wegmans the other day and saw a sign reminding me to celebrate March as Red Cross month, and I took the sign as a sign!

There seems to be a lot going on around here lately, so let's go back to a less stressful time...the day we brought our son home from the hospital after his broken leg and subsequent surgical adventure. (Why is there not a sarcasm font?) We had just gotten the boy to the couch when I turned toward the kitchen and saw my husband reading a piece of mail. The way he was holding it reminded me of a cartoon character reading from a scroll, like he was about to make a proclamation of some sort. Despite my exhaustion, I felt compelled to play along, so I walked closer.


Who's that from?
The Red Cross.
Oh, like a certificate that you are the best donor? (He had been donating platelets once a month for years.)
No. It says I have syphilis.

In that moment I decided that the whole surgery ordeal and concern for our son truly had taken a toll on him as well. What other reason could there possibly have been for him to not put that letter in his mouth and begin chewing? Maybe the shear volume of paperwork seemed like more than he could digest? 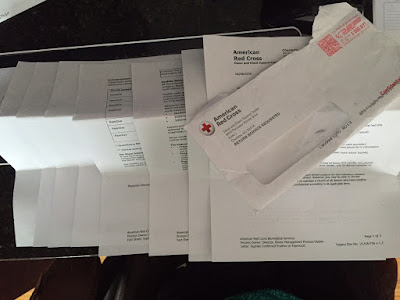 I recall muttering something supportive like "I can't deal with that right now", and walked away. Syphilis?

So the plan was that he would promptly go to his doctor and have more bloodwork done. My wits started to come back to me, as I wondered if the Red Cross had really notified my husband via a letter that he had syphilis. I found the envelope and decided to investigate for myself. (There is a chance I thought he misread something...or hopefully everything.)

Certainly they included information on false positives and why they occur? Nope. Sure, there was a lot of information, but nothing terribly easy to understand. This was certainly not a collection of paperwork that anyone with a short temper should have been able to put hands on. As some of my friends commented "Someone could have been shot over this!" 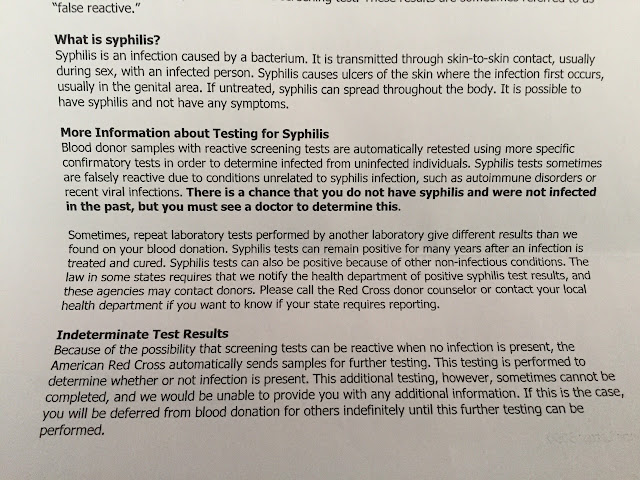 I am still not positive what that last paragraph means.

Basically what I knew was that my husband's blood was subjected to the same testing every month when he gave platelets and there had never been a problem before. I also realized there was a chance I was going to have to factor myself into this equation. It just did not compute-sorry if I am taking my math metaphor too far, but it did not add up. There was never any question in my mind as to whether or not I needed to concern myself with any infidelity on my husband's part, as for some reason my typically skeptical self had no doubts. (I also assume he would have eaten the paperwork, envelope and all, if he was trying to hide anything.)

We sat pondering all of the nothing we knew about syphilis, and how long it could actually be dormant (and would it have still shown up on bloodwork), and was there any saying which of us could have been patient zero in the alternate universe where these test results were conclusive, but wasn't I tested when I was pregnant? Then again, did we even know what tests had been performed? "The following tests may have been performed"? 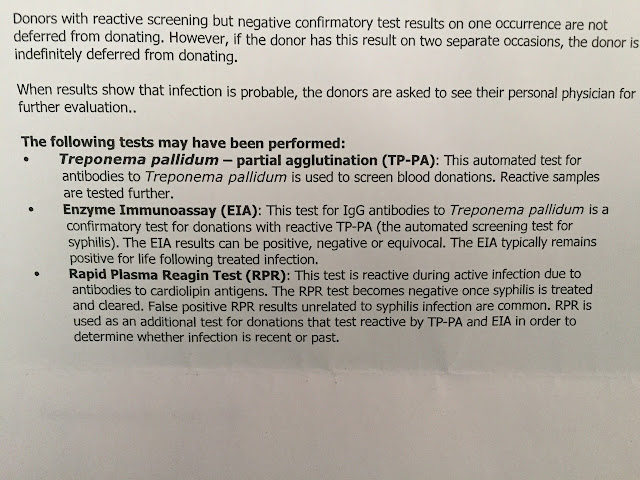 My husband's physician apparently had not had a recent run on syphilis patients, as he had to call the lab to find out which tests he needed to order. Of course they came back negative. And of course my response was that there needed to be a tie-breaker if one source said the guy had syphilis and another said he did not. Meanwhile, the Red Cross was calling and sending letters requesting that my husband donate due to their urgent need. He contacted the very important person with a very official sounding title on the letter and explained the situation, including the information from his actual physician. Clearly this was something that just had to be verified, and then he could be well on his way to spending a few hours at a time at the donation center in exchange for juice and cookies. Nope, he cannot donate again...ever...despite the letter claiming that happens with results on two separate occasions.

In an attempt to put this thing to rest, I questioned whether or not my husband had followed the directions on the paperwork and brought it with him to show the doctor. I guess in a sense I was second guessing whether anybody other than the Red Cross knew what syphilis was and how to detect it. I mean they had so much confusing paperwork that they must be the leading authority. Suffice to say another appointment was made, the paperwork was shared, blood tests were done, and my husband still did not have syphilis.

The more this story has been shared, the easier it has become to snicker about the whole ordeal. However, what remains at the forefront of the tale is the ridiculous way my husband was informed. It seems an attempt at a phonecall or having the letter direct him to call would have been more appropriate? Red Cross, I know you're busy, but dropping this potential time bomb in the mail did not seem like the most prudent course of action. Plus, you're kidding yourself if you think everyone even opens all of the mail you send due to the solicitation nature most of it has. (I guess that "confidential" on the envelope lured my husband in.) I am not sure what would have happened if he had tried to donate again as far as whether or not there would have been an alert in the computer system to turn him away before drawing blood. I guess now my husband will have to come up with some other elaborate ruse to get a few hours away to watch a movie without me. (Seriously, he watched so many good movies.)

**I suppose there are other disclaimers I should add, despite hoping they go without saying. It is not my intent to mock or make light of STD's whether they are present day conditions or throwbacks to colonial times. I also respect the service the Red Cross provides, and understand the reasons they must be extremely cautious.
Posted by Andrea at 12:45:00 PM