I showered and got dressed, in a dress no less. My pasty white chicken legs blended in, or may have even paled, against my new white shoes. My hair was fine. This was the big time, and I was confident that I had done well enough for the supporting role I was to be featured in. I stared down the mascara tube and decided "I've got this" and waved that dark brown across my dry lashes.

I had been walking past various parts of his gradation get-up for a couple of weeks…slowly desensitizing myself. A cap here, a cord there, the gown hanging in their bathroom in hopes of the shower steam taking care of the wrinkles. "Photos! We must make a first attempt at photos!" The glance into the camera's viewfinder was the first time I paused to truly take him in… 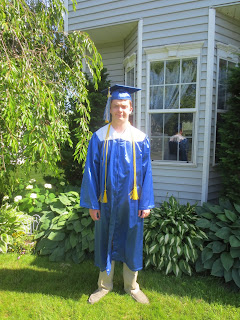 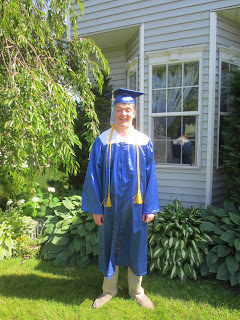 …in all of his goofy and sun-glared glory. Yes, this was a very special day, but this was still my boy. Take that mascara, as I still had this. 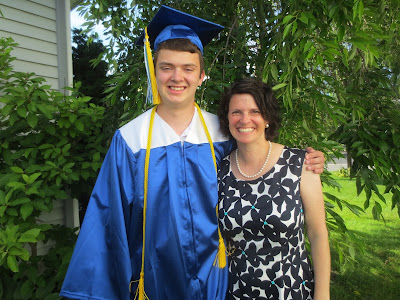 We survived the car ride downtown, got a parking spot, finally found some seats that were relatively acceptable, endured a forty-five minute wait for the main event and then…an announcement of the ceremony being moments away and something about bagpipes. Oh, there is something about bagpipes. Before I could finish texting one of my lifelines, the overhead lights were turned off and a spotlight shone on an amazing woman, who collectively spent six years teaching orchestra to my kids in middle school, all decked out, marching in, playing Amazing Grace on the bagpipes. I heard the mascara whispering its doubts, but I blinked them away. (Seriously though, bagpipes?)

Over 600 caps and gowns filed in to take their seats. Do you see him? 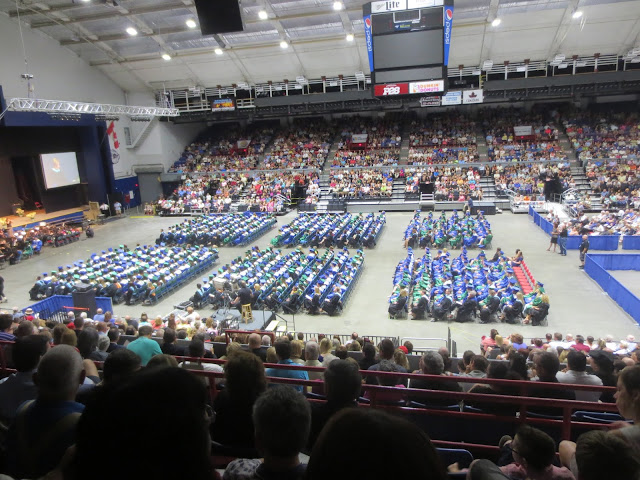 And so it went. Less than two dry-eyed (okay, that is a lie as I did have watery eyes when they switched their tassels and whatever was said after that, but no drops fell) hours later we were outside waiting for our graduate. He came towards us looking me straight in the eye, and I knew from recent past experience that if I cried, he would as well. So I smiled, grabbed him and hugged for as long as I thought I could get away with before passing him off to his father. I certainly would have cried watching him hug his sister, but was spared... 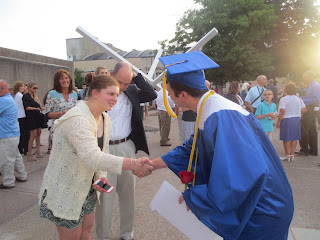 Honestly, these two. The graduates were given roses after they walked across the stage and were told at the end of the ceremony to give them to the person who inspired them the most, and other nice things along those lines. After  announcing that he was going to throw his rose on the ground and let us all fight for it, he handed the flower to his sister. 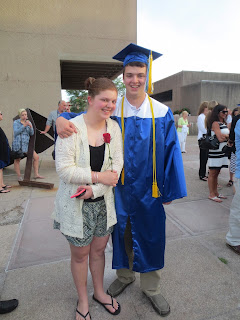 Are you bored yet? Not much longer, and then it will be three years before we do this again. Oh, but there will be that thing in August…never mind! So proud, so happy…yes, happy! 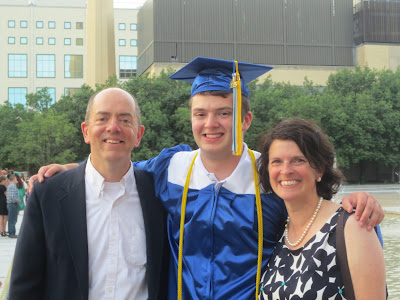 Did you notice the fountain in the background there? Maybe the first mother whose son ran through didn't have time to tell her son to take his shoes off. Maybe she didn't see it coming. This mom did though, and held his shoes. 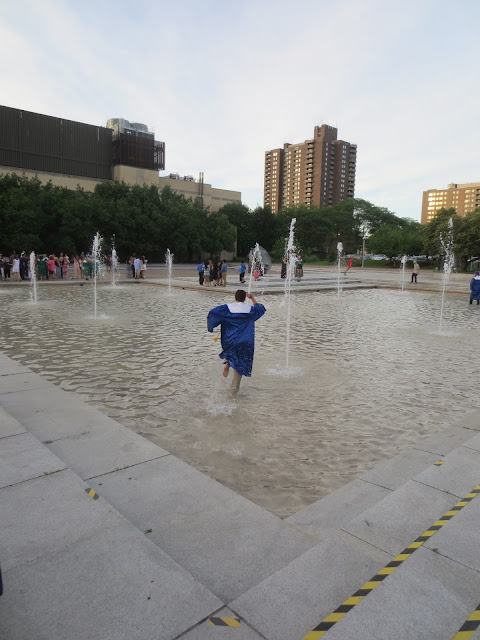 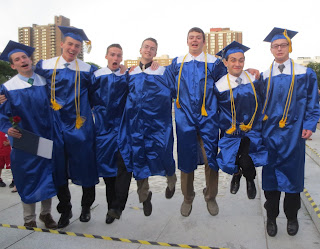