I guess you could say that I feel more stressed than actually crabby... 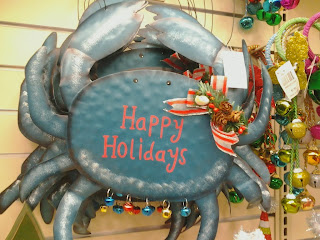 This was not a small item. Trust me, if it was, there are many of you who'd have found this gem in your mailbox. At $4.99, I had a hard time walking away, and now, seeing its jingling delight again makes me regret my decision to try to capture the glory in this simple photograph. Do you think they sold out?

In other items from the "things that distract me from creepy monkeys" list, I met these lovelies at a birthday party over the weekend. 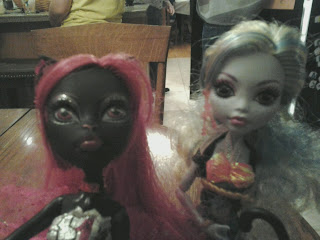 I believe their names are Catty (Somethingorother) and Laguna Blue. At least you won't have to wonder where your little girl's last nightmare came from. Yikes!

You know what's more fun than a barrel of monkeys? A case of bedazzled caramel apples! 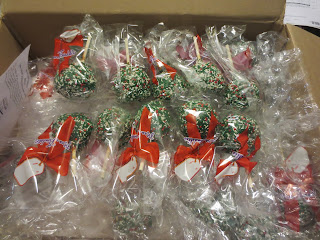 I received this package containing twenty-four of these gems. I don't even have to eat them sparingly. Not only did this friend have my back in finding some random gems, but she had awesomeness delivered right to my front door!

Let's see, what else have we done to get ourselves in the holiday spirit? Oh, we attended my daughter's holiday orchestra concert. Not all string music is particularly jazzy, and I did hear my husband lean over and ask our son if the selection being played was the "Happy Holiday Death March". Their rendition of Feliz Navidad more than made up for whatever that other, still brilliant, piece lacked in festiveness.

We also took our annual turn bell ringing at the mall for the Salvation Army. 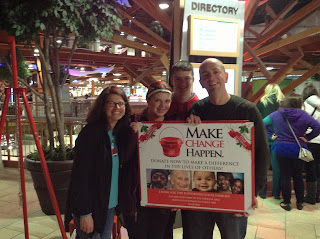 For the fourth year in a row we were greeted by bells that had their clangers removed and replaced with paper clips. Last year we planned ahead and brought our own bells, but sadly this year we forgot. We made due with some creative clanking. When the gentleman from the Salvation Army came to collect the bucket from our station, I inquired as to why the bells were so sad. His response was that it was part of their contract with the mall to remove the clangers to keep the noise down. I just smiled and nodded while thinking of all of the joyful noise we had made by banging two bells together for two hours. Those bells were brought together so hard in fact that the finish was rubbed right off of one set. I am not sure how many decibels the mall thinks a two inch diameter bell can make, but I assure you that what we came up with was far greater. Plus, you know how holiday shoppers hate noise, right? That is why they are out at the mall from 7:00-9:00 on Saturday nights.

Our location at the mall this year was right near floor to ceiling windows so that we could watch the snow coming down. It was beginning to look a lot like Christmas AND like we were going to have a wild sleigh ride home. This is our street once I was in my pj's in the warmth of my room. There actually is a street in there somewhere. 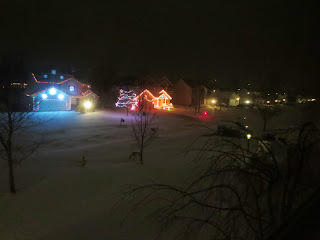 Ho ho ho hmmmmm...one of the hardest parts of making cookies this year was finding the ambition to do so. I had some trouble with my gingerbread dough, so we ended up with some folks who were not fit for distribution. My daughter was happy to have fun decorating them anyway. Here are a couple of my favorites from the We Dunkin U swim team... 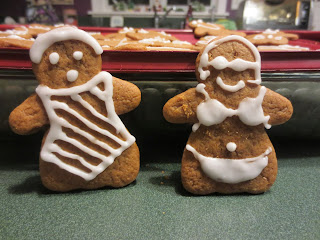 Seriously, the swim goggles on the right?

Mostly the ones I did were just sad about their substandard quality... 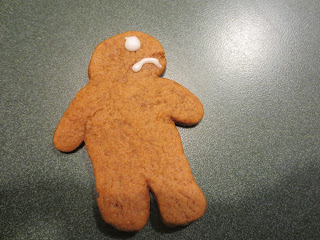 Well, I have presents to wrap, a dining room table to find and a panic attack just waiting to happen. Thanks for taking time out of your busy schedule to stop by. Keep calm and eat chocolate!


Stacy has everything under control at her place, so stop on by for a quick visit!