Let's talk about whoopee! Relax, I am speaking of the pie variety... 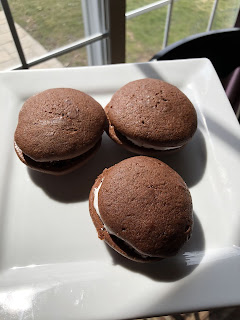 ...whoopee pies. I can still see, and practically smell, those chocolate discs cooling on my grandmother's cook top. I was not a fan of the fully assembled treat, as I did not like the filling. (Go ahead and sigh, and know that I had no interest in Oreo filling either.) I was left to hope that there would be an odd number on the tray to warrant one being sacrificed to me. We couldn't just go willy-nilly breaking up pairs, plus then I would have to eat TWO cookies, and that was not an edge Blanche tended to let me live on.

I don't know if the yield of her recipe was low or if the cookies were such a labor to make, but they were a hot commodity. Those whoopie pies were doled out according to family size on a one-to-one ratio. I do seem to recall a time when my mother and I received three of the coveted confections, but there was still the matter of that messy filling to contend with.

Fast forward a couple of decades to where I am married to a man who cannot pass an Amish baked goods stand without buying a whoopee pie. I like to look at them for nostalgic purposes, but that filling? I even bought myself a whoopee pie cookbook years ago, simply because the idea of them made me happy. I still figured they must be very difficult to make though, due to the whole rationing thing. When I recently ran across my grandmother's recipe, my mind sort of wandered off as soon as I saw the word shortening in both the cookie and the filling, as I think I have purchased that item three times in my adult life. Maybe some other time...

These days are nothing if not "some other time". I have not been to visit my grandmother since March 3rd because soon after that day, her facility was closed to visitors. If you've been following our story, it will not surprise you to learn that phone calls are not really a viable means of communication at this point. My mother received word the other day that they would be assisting the residents with facetime calls, and we were given a date and time. We decided it was feasible to be socially distant, and would meet outside on my mother's deck for the call.

I knew it was time. I even purchased a can of shortening on my scheduled Aldi's outing.

My daughter whipped up the batter, with neither of us having any idea what it was supposed to look like, nor how it would behave in the oven. For some reason I only remember them coming out of my grandmother's oven, but not what happened before they went in. It is possible that I had other things to do before the smell of fresh baked goods lured me into the kitchen.

There was nothing particularly tricky about making them, and we ended up wih enough to make 20 pies. 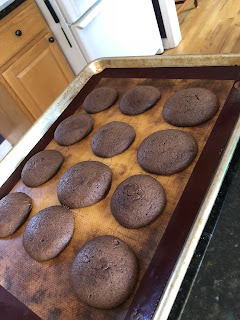 I think the tops did appear to be smoother after the batter sat for the next rounds. I was focused on other things. 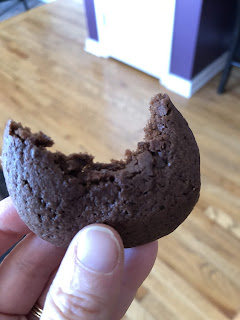 I could not bring myself to make the shortening laden filling, so I cheated and just used a hefty smear of fluff. A quick tally of who might be in attendance on the deck, and who they had at home, was done, and I loaded up my grandmother's cookie transporter and headed out. 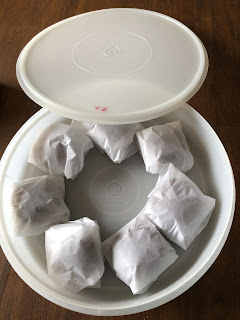 We did not have super high expectations of how the call was going to go, but we did have sunshine and cookies to drown our sorrows if necessary. 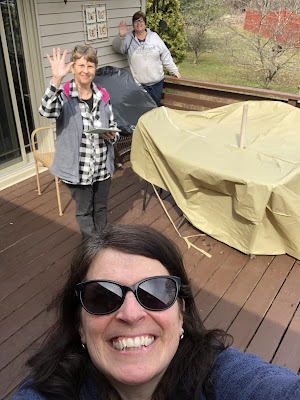 It was unclear as to whether they would even be able to rouse my grandmother from her afternoon nap. Suddenly the connection came through and I heard her voice. She knew who my mother was and asked if she would come visit soon (yes, of course). Her voice! 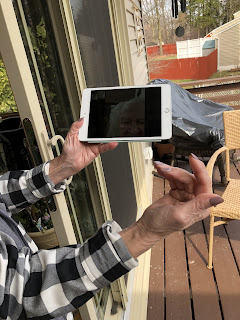 My turn came and she knew my name and told me how happy she was to see me. My aunt took her turn, and then we sort of circled around again, arms outstretched to pass her. I told her about the whoopee pies, and she thought they sounded good. Then my mother got to talk to her about how she had made her dinner roll recipe. There were a few copies of it in gram's recipe box, but only one was signed...

Gram thought it would be a good idea for us all to get together soon, so we agreed. Although when the facilitator asked my mother if she wanted to set up a call again for next week, my grandmother instantly piped up with "No, I don't think that interests me as I don' know what I might be doing then." Suffice to say, my mother gladly accepted the invitation. Lightning may not strike twice, and next week's call may not go quite as well, but today we are grateful.

I have eaten more cookies today than necessary. (Yes, I realize that does suggest that there is a recommended daily allowance.) I wouldn't go so far as to say that the whoopie, or whoopie-less, pies are even in my top ten favorite baked goods, but that taste of nostalgia from a more simple, and less scary, time was a treat.

If you are interested in another one of my nostalgic food posts, here is one that hailed from my other grandparents' house...where the Entenmann's and stove toast were, but more importantly, artichokes.
Posted by Andrea at 8:37:00 PM