We were running out of time for the porch guests to stay once they had their fourth of July gathering. (Granted every day had become a festival of fun out there.) Nobody wanted to host a graduation party with the help of the swooping poopers. Plus, the rest of the porch had been taken over by spider webs and I had not billed our event as a nature field trip. The power washer was waiting in the garage, ready to eradicate everything but the flowers. The birds did decide to leave the nest…

"We fit just fine in here!" 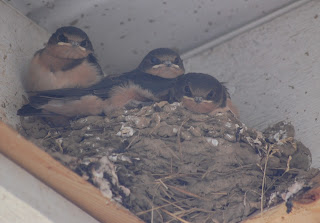 "This flapping is exhausting!" 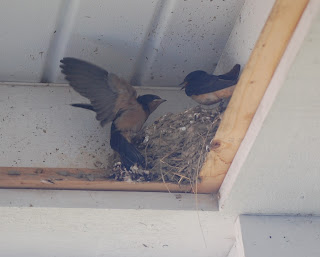 "Well, I don't want to stay by myself, and this place is getting disgusting!" 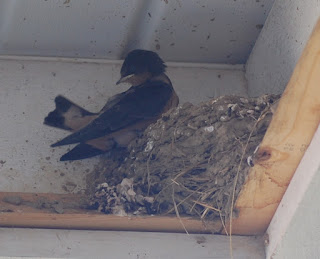 …but then used us just for lodging at night. No thank you! So, the nest was removed the second week in July, with little ado since it was daytime. However, as evening fell, their plans were going to need to be FOILED! 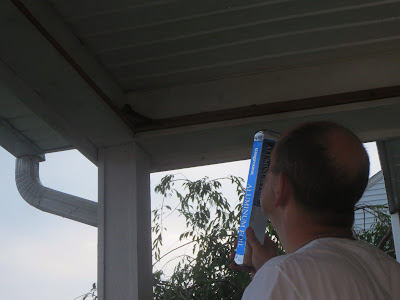 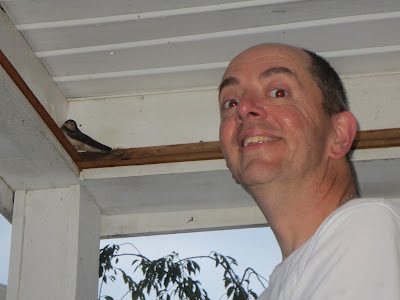 Once again, you can see that I have learned no lessons about sending someone else out to be on foil duty. Granted you can also see that practice is not nearly perfect in deterrent techniques either.

"Check out my bright shiny perch!" 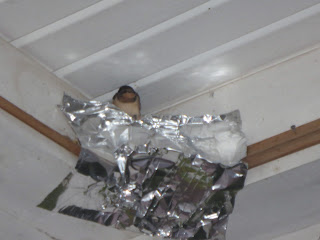 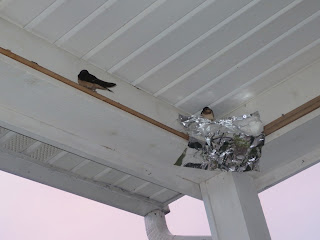 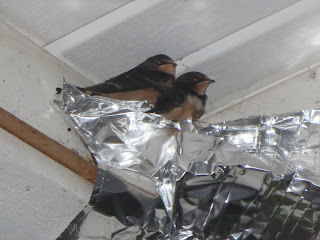 The birds decided that aluminum siding was not going to make a decent nesting material, so they found room at some other inn on subsequent nights. They did still stop by to make sure I hadn't changed my mind though...

As far as the continuing metaphor...We are now in the final phase of getting our oldest ready to leave the nest on Tuesday. I hope he maintains as strong of a sense of home as these crazy birds did. Um, well, now I just feel badly since I made those birds depart. Sheesh. Well, anyway, my son told his friends' mother that I was all set and ready for him to leave. I had no idea I could possibly be up for an academy award this year. Pass the peanut m&ms...
Posted by Andrea at 12:23:00 PM