In Order to Move

Let's pretend this is my first post of 2021. I am not sure if it will set things in any better motion than my last post, but I was super disappointed in myself when I realized that was how the blog entered a new year.

I could have been lulled into a sense of security, but I had my usual level of skepticism when waltzing through the store the other day. Still, it was difficult to resist the belief that this pandemic might be about to start its final descent when I saw this... 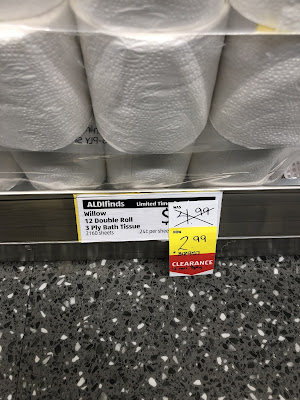 ... a clearance on toilet paper?!?!?! What kind of madness was this? 3-ply no less?! Nice try, but I refrained from buying party supplies to celebrate. I also could not have possibly bought enough double rolls for the absolute poop storm that was to come. There is no need to rehash that here, as it is not likely to help us move forward. The only way I know how to cope when life feels sideways is to try to restore order to something.
I was going to need to expand upon my current mental well-being plan. Oh wait! I haven't shared the details of that program yet. I don't have a patent on this beauty yet, so feel free to claim and use it as your own. Once covid left the building, and took my excuse to hide out holed up in my bed all day with it, I knew I was going to need a plan. First, there had to be a reason to throw off the covers and get out of bed to begin with. I had to think fast because each passing second that Saturday morning allowed my body to sink a millimeter further into my mattress. Keep it simple, just go for a walk, one foot in front of the other. You know what clothes to put on - spandex is clearly more for function than for your form, but your thigh rub will thank you. Just go with the two mile route you know. By day three, I enhanced my plan slightly by opting out of wearing a bra under the spandex to dissuade me from lounging about in my walking wear for the rest of the day. I lack the body confidence to inhabit our family room in my sausage casing finery to begin with, so lacking any other necessary support just sealed the deal for success with my plan. Things were going well with me up, fresh-aired and then dressed by 9:30 each morning. Okay, the timing might have been a slight flaw, but I was a creature with a habit. We don't need to address the panic that ensues whenever I run out of my frosted mini-wheats that I typically eat for breakfast. Just keep putting one foot in front of the other.
So that is how I was coping with my own self, but what about days when we all feel the additional weight of a rather scratchy and uncomfortable blanket threatening to suffocate us? Feel free to share any strategies you have. I am always partial to those involving chocolate, but I have other rules about what time of day that can start (unless we are talking chocolate chips in the pancakes), so I started by tacking on an extra mile to my morning commute. If nothing else, that gave me fifteen more minutes outside to come up with a better plan.
It may have taken that village set up to bring some joy to December, but I feared it was going to take that same village leaving to provide peace in January. I toyed with the idea of just taking down the actual Christmas tree and letting the scenic winter remain. The notion of what a tribute the set up was to my grandmother was pleading its case for staying power, but my need to restore order and move forward proved stronger. There was so much of my grandmother here for the holidays, from the cookies to the ornaments on the tree to the little santa cups filled with Junior Mints. It may have been time to put all of those things away, made easier by realizing how much of her is with me all of the time...always.
The way these porcelain pieces fit so snugly into their styrofoam homes is comforting to me. 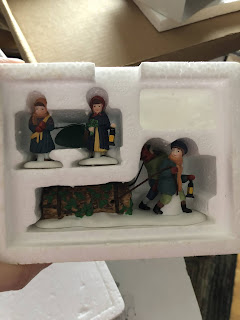 Is there anywhere you feel as protected as these folks appear? I guess this is why Packaging Science is an actual college major. 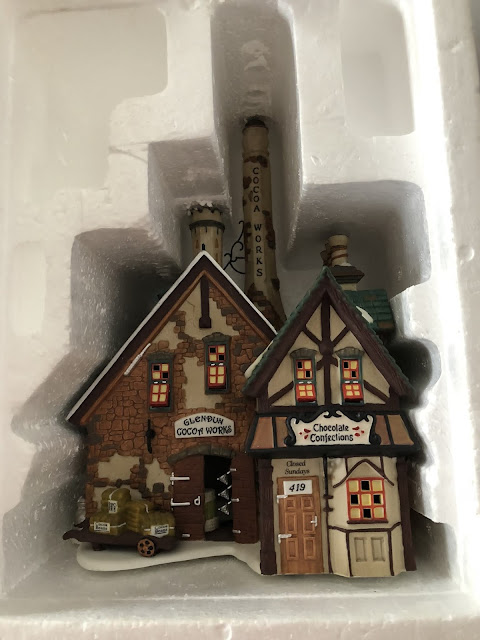 We gave this Cocoa Works to my grandmother for her eightieth birthday as a tongue in cheek acknowledgement of her alleged allergy to chocolate. She said eating the confection made her scalp itch, but that was apparently not a high enough price to pay to give it up.
The endeavor to pack up the village also gives me a slight thrill... 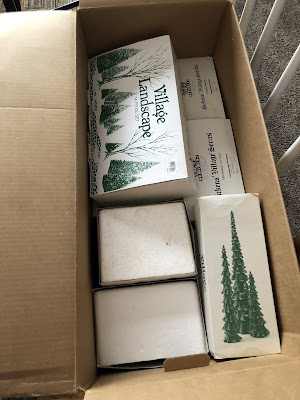 ...as I do not have many other opportunities to exercise my tetris game style puzzle skills. 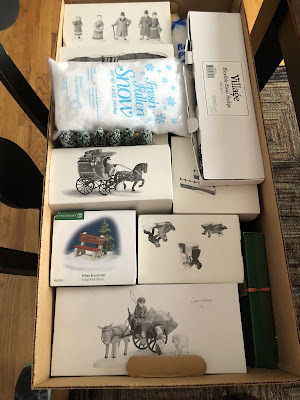 In a moment of what can only be described as weakness, I let my son bring his Christmas legos upstairs for the season as well. Maybe I was considering that this could be his last year living at home, granted those legos will probably be living here with us for a bit even after he moves out. Maybe it was his way to honor my mother-in-law who gives him the holiday set each year (top right elves' clubhouse was 2020). I knew she would like to see a photo of the setup! Who was I to squash a village of any sort? Who was I to decide what could bring joy this year? 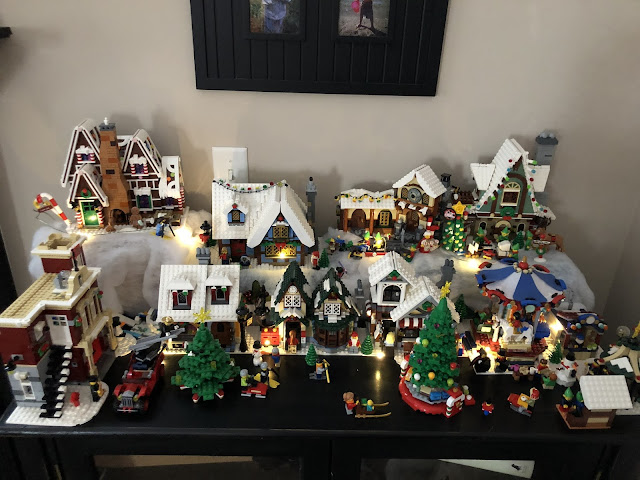 That was far less enjoyable to put away, and not just because he looked at me like I was the Grinch when I told him I was moving it back to the basement. None of the four shelves it sprawls out on down there were empty, as he had left some odds and ends behind in his enthusiasm to get things upstairs before I changed my mind. I was venturing into territory that I am not typically allowed to mess with, but we both knew there was never going to be a time either of us actually wanted to take on the project. I just needed an empty surface back so I could collect things hiding around the house that used to belong there.
The place feels a little bit lighter, making it easier to breathe and hopefully a bit easier to move. I hope you are finding your way, heading toward the light...wait, not THE light, just something brighter than darkness. Keep putting one foot in front of the other.
Posted by Andrea at 5:44:00 PM