It took this village

I gathered some photos and set out to write a post about our history with the Dickens Village. One paragraph in I remembered that I meant to check to see if I had already written such a post, as it seemed fairly familiar. Sure enough, I found it.
There was a small part of me that did not want to partake in the project this year, but I knew in my heart that was not really an option. Here is my village this year...

...and here is my mother's, as thankfully she followed along... 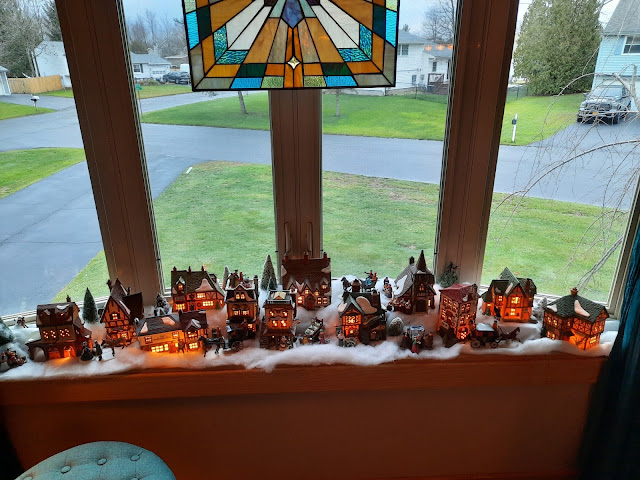 ...and here is the post originally published on December 7, 2015...
In 1992 my grandmother started all of us with Department 56 Dickens' Village pieces for Christmas. Each of her three children got a church, believed to be vital to village functioning, and the grandchildren received a store of some sort. My first acquisition was the Poulterer, as it was part of a set of five stores and their were five grandchildren. I had visions of some day bartering with my cousins to collect the other four vendors. I embraced the start of this tradition, not necessarily because I was an aficionado of porcelain collectibles,  but rather a fan of traditions. I still am. There are plenty of things that I do, taking more pleasure in the comfortable familiarity and predictable expectation than in the event itself. This new holiday happening held a double bonus as I would get to help set up the buildings and look forward to receiving a new one.

My grandmother was so fond of her plan and of the houses themselves that she started a collection for her and my grandfather's house as well. Suddenly these very hard to buy for people were an urban development team looking for growth, and we had so many options to assist them. While my grandmother was focused on the houses themselves, my grandfather's interest had to do with the mechanics of displaying them. He started by electrifying the hutch, like literally put outlets in it with a master switch. Shelves were built, and when the pieces exceeded what could reasonably be displayed on the square footage provided by the hutch, removable wooden side wings were constructed that were screwed in. Some twigs and small blocks of wood were fashioned into bare winter trees to supplement the purchased evergreens. 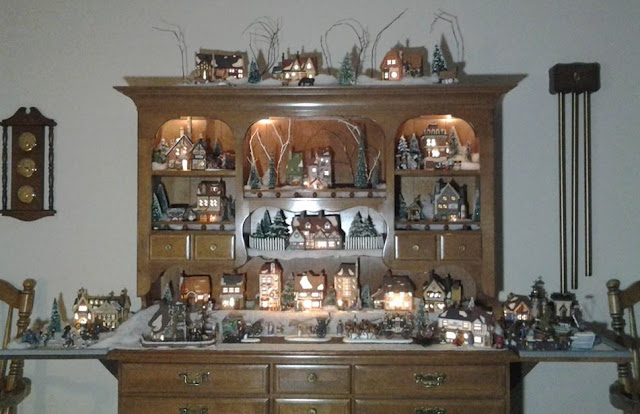 Never once did I hear the phrase "I think the village is at maximum capacity!" It just magically appeared some time in December, display complete. We were all at our own houses, setting up our own modest towns. Truth be told, I have the makings of a densely populated city, as other people added to my collection for a few years as well.

Eventually, the task of bringing the hutch to life got to be too much for my grandparents, but their desire to have this centerpiece of holiday decor did not fade. I signed up, along with my mother and aunt, to do the heavy lifting so to speak. We had no idea what we were in for that first year, so many cords, so many bulbs, so many accessories. My thoughts quickly went from the nostalgic "aw, I remember when I gave them this and that" to "oh my gosh, did we really give them all of this". We had obviously seen the final product year after year, but had not committed any of it to memory. Our own set ups had more of a "what might look nice this year" approach. We quickly found out that my grandmother's claim that different was not a bad thing actually meant as long as everything is the same. At one point a photo was offered for guidance, but it had been taken before the eastern and western extensions had even been added. My grandmother kept offering "gentle" suggestions and eventually the job was done.

Strategies were discussed with regard to how future endeavors could be streamlined and less maddening. I might have suggested a scenario in which my grandmother was taken out to lunch while the other two elves magically whipped up the scene. Instead we just muddled along, refining our method as we became more familiar with all parts of the operation. Eventually I found peace in doing the job myself, while nodding politely in response to the chatter. My grandfather passed away, and my grandmother was not necessarily in a position for me to ask her for assistance. As I sat on the floor, balancing those side wings on my head, while trying to screw the tiniest of hardware in to the underside of the hutch, I always assumed my grandfather was watching me and smiling...or laughing at me. I was fine with either.

As my grandmother's dementia progresses, it seems there is comfort in the familiar. Considering the very warm temperatures and lack of snowfall, it was almost plausible for her to not be able to keep track of the time of year, despite it being heralded as "the most wonderful time of the year". I made brief mention of getting her houses set up, and thought I saw a vague look of recognition on her face. I looked at my calendar and picked a day to set up her houses. She didn't express much interest at all in what I was up to, even though she was in her usual prime viewing seat on the couch. No opinions were offered. I wasn't sure if I was going to have time to finish the project in one session, so I made sure to keep everything put away as to not look messy. The mayor looked like she needed a nap, so I quit for the afternoon. There was an entire box of people and accessories still in the closet that I had planned to tackle on my next visit.

When I was discussing my afternoon with my husband, he asked me if my grandmother had asked to have the houses put up. When I responded that she had not, he asked why I did them. I started to sputter and stammer out a response that as long as my grandmother lived in that house, those houses would be up for the holidays, she loves those houses and what if she asked about them at the last minute. Clearly it was my grandmother's best interests I was considering...clearly.

The next day I returned to bring out the heart of the exhibit, the people. My grandmother remarked that the village looked really nice, not "overdone". Not overdone? But that was the theme of Hutchville. I asked if she wanted me to put some more of the accessories out, and her answer was no. 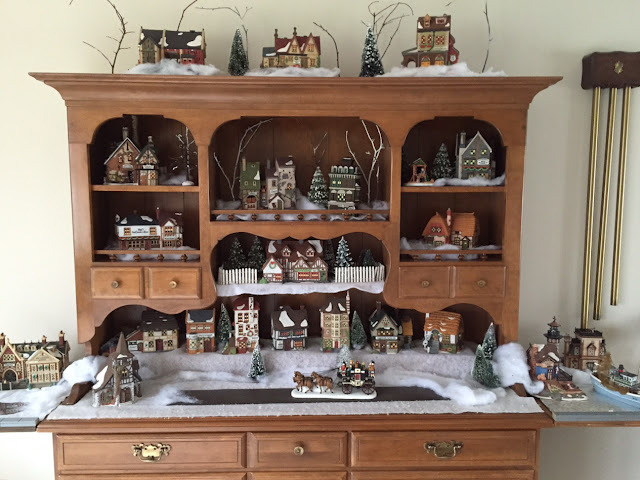 Yes, the village looks nice. In fact, my husband can't really see much difference between the two photos. Meanwhile I was seeing that the schoolyard had no children and merry-go-round. The church had no gate and nuns. (Gads, and those crazy little tombstones my grandmother had made back in the heyday.) The animals weren't on the farm. Where was the hustle and bustle? It was all packed in styrofoam and cardboard. I forced a smile and we sat on the couch to watch the birds at the feeders outside.

I realized I had made this completely about me. My wish to find some sense of familiar in her house that is changing. My wish to cling, not only to traditions, but also the memories that she is ever so quickly losing.