In these scary and uncertain times, it is not my intent to poke fun at fellow humans who are either just trying to get through the day, or do their jobs...unless it's funny. In such cases I will still try to be kind, but then call my mom with the news of the day and then come here to hopefully share a laugh with you.

First up we have the conversation I overheard walking out of the little grocery store nearby. A woman was complaining to her friend about the limits places are putting on items. Apparently she buys seven gallons of milk at a time because that is how much her family drinks each week. The voices in my head told me to just keep walking and not say anything about needing to know how many people were in her family, how big her refrigerator was, or really any other commentary...but that didn't stop me from thinking about her and her beverage struggle for the rest of the day.

Next up, we have a minor mishap that occurred while we were packing up my daughter's things from her dorm room. Once we had returned home and started the arduous task of trying to find places to store everything, my daughter noticed one bin in particular. She informed me that the shower curtain, that was in fact ours, was still equipped with shower hooks, that belonged to the school. "Who cares?" was my initial thought, but "Oh my gosh! How much will they charge the rest of the suite mates for that $5 item?!" quickly followed.

I thought back to the time I had to call about the dryer in my son's apartment after it had been broken for four weeks, with numerous attempts by his apartment mates to get it taken care of. I remembered my relief that a woman who sounded my age answered the phone, because that fellow mom understood my plea, and how the rent we paid did not warrant shelling out additional funds for four guys to pay for laundromat services. She even waived some nominal mystery fee from our account. Certainly I would have similar luck in calling my daughter' school's resident life office!

The voice that answered the phone was full of enthusiasm...and youth. I told her of my mistake, and asked if I needed to mail the shower hooks back to avoid the girls being charged. She sounded super jazzed to let me know where I needed to send them back to. I tried to match her level while confirming that she would make a note to not bill four students for a dozen hooks. I admit that part of me was thinking that if we both repeated the information enough times, she would suddenly appreciate how ridiculous it was. Again, in these already stressful times, I did not want to rain on her parade by asking if over $5,000 in room and board charges each semester wouldn't cover some new hooks (pretty sure we arrived in August with a set, not realizing that perk), nor by requesting to speak with an older adult. 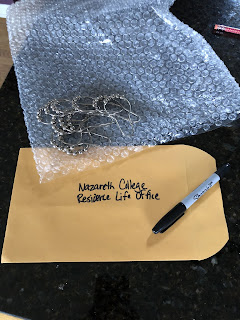 The postage was $3.90, but in addition to clearing our names, I got this swell story.

Lastly, I realized I needed to take my mood outside for a walk in the seventy degree temperatures yesterday. I was on the phone with a friend who lives about fifteen miles east who was also out walking. He warned me when some raindrops swept in over his way, but apparently I have zero sense of how fast weather moves. I did not take the turn that would have gotten me home quicker because of my poor planning. He said the rain lasted thirty seconds by him as I was barreling along, head down, through some rather aggressive precipitation. Five minutes in, and I was just getting more soaked and windblown. Right after I almost took myself out with the hood of a car I didn't see parked on the side of the road, due to the whole head down strategy, a woman driving by did ask if I anted a ride somewhere. I did not want to disrupt her social distancing by getting in the car (and realized later she probably thought I was afraid of her car germs), and also, how much longer could it really rain? 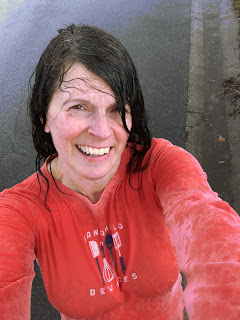 When I got within a few houses from home, I saw my husband standing on our porch. Not with car keys in hand, ready to come get me, but just watching. Yup, this is one of the folks I am cooped up with.